Xenoblade Chronicles 3, the biggest launch ever!Will it be the best JRPG of the year? 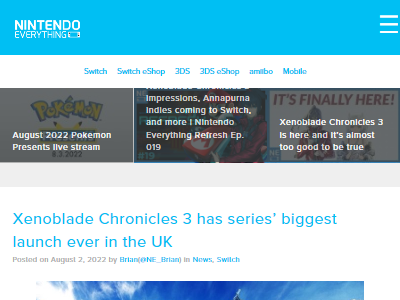 According to the latest data from GfK,It turns out that the title “Xenoblade Chronicles 3” for Nintendo Switch released on July 29 marked the biggest launch of the series in the UK.According to foreign reporter Christopher Dring.

Note that these rankings are based on aggregate data for the packaged version only, and do not include actual sales of the download version.

It’s a really fun game, so it makes sense

It looks like it will be the biggest sales ever for Monolith! I’m so happy!

It can be said that the game became a masterpiece from the moment it was released.I think the day will come when people talk about it like FF7 or Chrono Trigger.

Somehow the best JRPG of the year

>This is based on aggregated data for the physical version only, and does not include actual sales for the download version.

Sales of the DL version are increasing these days
This seems like an unbelievable number!