With the advent of the strongest portable game machine “Steam Deck”, the story of a person who has become difficult to return to the Nintendo switch 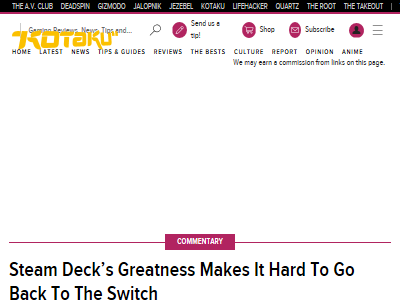 ・I recently enjoyed Mario + Rabbids: Galaxy Battle on Nintendo Switch, but after owning the Steam Deck for a few months, I found it difficult to go back to the Switch.This is because the number of new titles that do not work well on aging hardware has increased.

The Steam Deck makes playing 60fps games on your couch super easy.On the other hand, it seems difficult for the Switch to run a new game like Bayonetta 3.

・Until now, we were able to tolerate some performance issues because it was a portable device.But now, in 2022, given that the same portability gain Steam Deck performs much better, it’s getting harder to overlook.

・Steam Deck can be connected not only to a TV, but also to various gamepads, keyboards, and mice, and it also supports mods and cross saves with other models.The switch feels increasingly obsolete

I sincerely hope that the Switch Pro or Switch 2 will come out soon.Otherwise the Steam Deck will continue to win my playtime as it delivers a better gaming experience

I also use Steam Deck for the first time.

It’s true that the Switch has no other redeeming qualities other than its exclusivity.

Well, it’s a new model and the price is more than doubled, so it’s natural lol

Hey Steam Deck, why bother buying a new one when you can play it on PC?

Steam Deck is great… but if you want to play Nintendo games, you’ll end up playing them on the Switch.
I don’t feel like it’s comparable

If you’re going to do it on PS5, why not do it on PC or Steam Deck?

Do you want me to tell you from the beginning that there will be exclusive software for PS5? ?