VR version “Among Us” will be released on November 11th!3D spacecraft, first-person view, 4 to 10 players can play online

The VR version of “Among Us” will be released on November 11th. As “Among Us VR”, the spaceship is built in 3D while maintaining the original tension 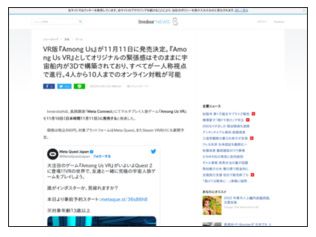 Innersloth announced at the keynote speech “Meta Connect” that the multiplayer werewolf game “Among Us VR” will be released on November 10th (November 11th Japan time).

The price is 990 yen including tax. The target platform is Meta Quest. It will also be available for Steam VR.

In addition, online battles between 4 to 10 people are possible among those who have the VR version. The supported player modes are “standing play” and “sitting play”. The target age is 13 years old and over.

Players can expand their field of vision with the 3D body’s line of sight, allowing them to discuss with each other in a new way. Using the Touch controller, it seems that it is possible to move the crew’s hand finely to press the button or point the imposter with the finger.

The hottest game “Among Us VR” is finally coming to Quest 2! ! Play the ultimate alien werewolf game with your friends in a VR world.

Can you spot who is the imposter?

* Target age 13 years old and over

[Fun]The VR version of “Among Us” will be released on November 11th! https://t.co/L9EGk6lVIb

The line of sight between players will be at the height of the 3D body, and it is possible to use the Touch controller to move the crew’s hands finely to press buttons or point to the imposter with a finger. pic.twitter.com/OHtAmtEv8A