We have posted a notice regarding our response to fraudulent activity.
Please observe the terms of use and enjoy “Uma Musume Pretty Derby”. https://t.co/PdgdeyCEr6#horse girl #Game Uma Musume

Acts such as using external tools and sharing accounts with multiple people, etc.Accounts that violate the terms of use will be suspended.
We hope that you will continue to enjoy “Uma Musume Pretty Derby” while observing the terms of use.

too late to respond

It’s about sage, so it’s not macro
I’m about to crush the umapyoi checker

Is it a game that is played illegally?

You’re an idiot for playing Uma Musume without using macros

↑Isn’t it stupid to do it by cheating?

This is a game where you buy macros to play

1 Training takes 1 hour, so it can’t be helped…

There is also a problem on the side of time-wasting games 🥺
I used to use a tool in the past, but even that became tiresome, and I didn’t train for 2 months.

Uma Musume’s sales would be terrible if all the high-ranking Maclars were banned at once.
There is no way to erase the best customer

I had a heavy charge McLaren BAN in Granblue
If you leave it alone, it’s not illegal

Is kizuna safe because it’s not a macro?
It’s manual after all

↑ Stop interfering with internal data
Cruz was the one who avoided it.

Saige has released a video on how to detect fraud

With this, you can immediately detect Maclar, who obviously has a strange play frequency…
The question is why haven’t you done it before?

Because it is supervised learning, I think that the data of cheaters is necessary
Now that we have all the data, we can start hunting.

Why is the summer ban festival so late?Maybe it’s because we finally have enough data
I think I will do this regularly from now on. 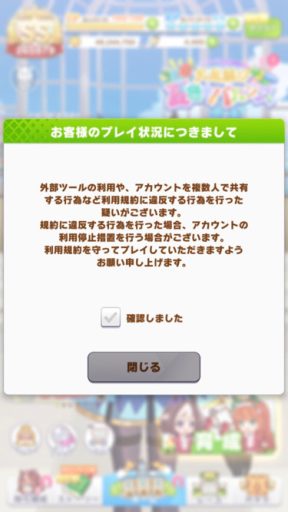 You’re really incompetent if you can’t get one ban

From that point of view, the best thing would be for them to keep charging for healthy play.

Isn’t it bad to share dirt instead of duplicate dirt? why?

Is there any benefit to sharing an account with multiple people?

In short, it means that the person who buys and sells accounts will be banned

You don’t have to release it like this, so I want you to ban it quietly.
I don’t want to even recognize the existence of cheaters.

Collect jewels from cheating accounts and distribute them to everyone

Macros were a hot topic in the beginning, but they were still there.