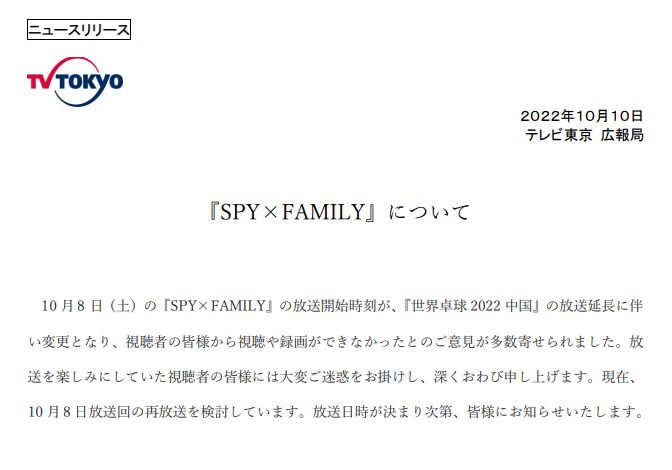 Saturday, October 8thThe broadcast start time of “SPY x FAMILY” was changed due to the extension of the broadcast of “World Table Tennis 2022 China”, and many viewers complained that they could not watch or record.We deeply apologize for the inconvenience caused to the viewers who were looking forward to the broadcast.

We are currently considering rebroadcasting the October 8 episode.We will let you know as soon as the broadcast date is decided. 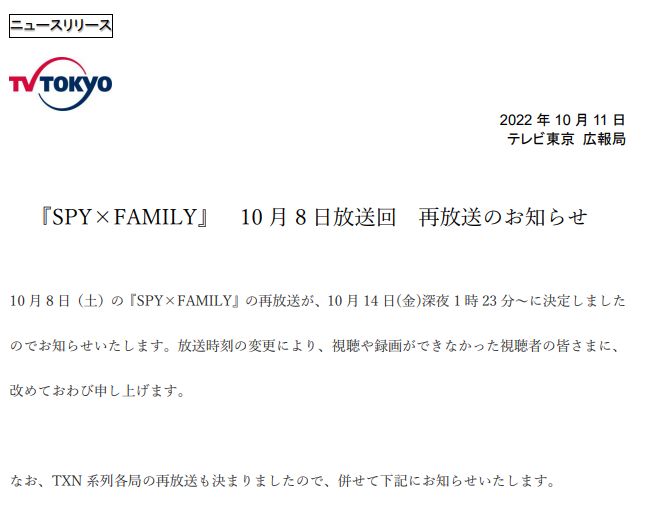 We are pleased to inform you that the rebroadcast of “SPY x FAMILY” on Saturday, October 8th has been decided from 1:23 midnight on Friday, October 14th.We apologize once again to all the viewers who were unable to watch or record the broadcast due to the change in broadcast time.

In addition, rebroadcasts of TXN affiliated stations have also been decided, so we will also inform you below.

As expected of our TV Tokyo!

Thank you for your flexible response!

TV Tokyo is serious about anime.

There’s also a distribution now, so there’s no need to make that much of a fuss

Did you succumb to Kramer?

No problem with ABEMA

It doesn’t mean that it should be rebroadcast.Please do your best not to repeat the same thing next time.

Some say it’s okay to watch the broadcast
Some people get frustrated if the recorder doesn’t have all the recordings… right?