The strongest grabo “GeForce RTX 4090” and “RTX 4080” that all gamers have been waiting for is finally announced! !What a price 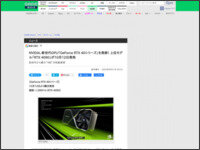 ・The GeForce RTX 40 series is an RTX 3rd generation GPU that uses the Ada Lovelace architecture. In addition to supporting the rendering technology “DLSS 3” that uses deep learning, it achieves up to twice the power efficiency by manufacturing with a 4nm process.