The startup animation of the Nintendo Switch prototype “NX” has leaked out and become a hot topic! The logo and design were supposed to be like this…! ? 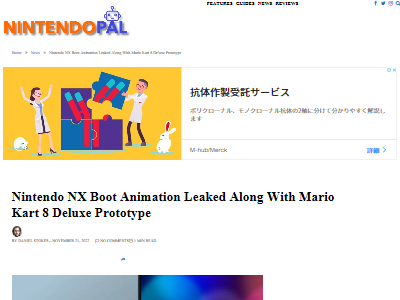 The Nintendo Switch prototype was originally codenamed NX.It seems that the startup animation of “NX” and the prototype of “Mario Kart 8 Deluxe” have leaked recently.

It is said that these data were left in the development machine of Nintendo Switch.

The Nintendo Switches Codename was the NX and this was an early Logo / Boot Up animation used during development of the Console ( It was found in the Mario Kart 8 Deluxe Prototype ) This was never seen outside Nintendo pic.twitter.com/B1bS5zCKOu

In addition to the NX startup animation, a gameplay video of the “Mario Kart 8 Deluxe” prototype (build date 2016/10/18 09:37:23) was also found. The video has already been taken down due to copyright infringement, but the screenshots are still available.

Do note that the characters shown WILL NOT be part of the Booster Course Pass, and are likely just placeholders.

I think I can hear the click of the switch now

↑ Did it symbolize the joycon drift wwww

It’s been a long time since I heard about NX.

Did the switch have such a logo and animation at the prototype stage?
This is completely different from the current red and click

Nintendo NX!I already miss the time when everyone was talking about
At the time, the Wii U was in such a miserable state that it was thought that Nintendo’s hardware would be useless, but I never thought it would turn around like this…