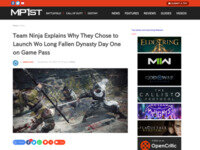 ・Team Ninja’s new action game Wo Long: Fallen Dynasty will be available on Xbox Game Pass from day one

・Why did Koei Tecmo agree to this contract?That has mostly to do with the game’s multiplayer and the studio’s desire to have more people play the game.

・Producer Fumihiko Yasuda of “Wo Long” responded to MP1st’s interview and explained why it will be distributed on Xbox Game Pass from the first day of release.

Q: Wo Long will be available on Game Pass from day one. Why did the team decide to implement Game Pass, and how will it benefit the team?

Yasuda P“It’s our first day on Xbox Game Pass. We’re making a very difficult game, and I don’t know what you guys think, but it’s going to be on day one on Game Pass. By doing so, we have the chance to have many players who have never played this game play before, so I think we can acquire more players around the world than ever before.For Koei Tecmo Games, Team I’m really looking forward to it as it’s the first attempt for Ninja.Also, since you can play with many people, I think it will be very useful for multiplayer, such as increasing the number of people in your party and challenging bosses.”