The new model of PS5 is shipped! It’s improved in a good way! 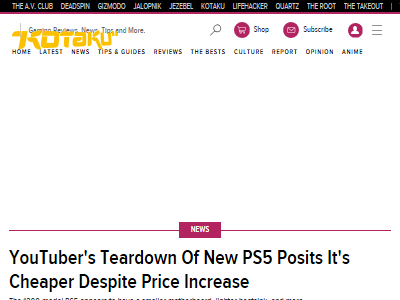 ・This machine has become a hot topic for being about 600 grams lighter than the initial model, but Sony has realized efficiency and energy saving inside the hardware as if to back it up.Power consumption has been reduced by about 10%, and it is believed that manufacturing costs have also been reduced.

・The most noticeable difference is the size reduction due to a significant change in the heat sink and motherboard layout.Even after the change, the heat and noise output seem to be the same as the old model

Raise prices while lowering production costs! This is what we call a corporate effort! w

It’s always the first model that costs the most.

Do you think that miniaturizing the motherboard costs extra money?I don’t think the cost will be reduced that much.

Lighter weight, lower power consumption…
How are you? ?

Well, I’m going to raise the price, Yaruo-san
I don’t think it’s because of this minor change, but… No, I don’t care, just let me buy it at the store as usual.