The king of the game world, Minecraft, announces the ban on NFT “NFT creates the haves and have-nots, it goes against the Minecraft spirit” → Overseas gamers with many anti-NFTs are in a festive state


Minecraft declares NFT ban, the reason is “to create a model of rarity and exclusion that contradicts the spirit of Minecraft”-Gigazine 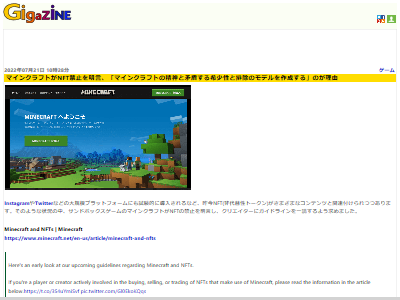 Sandbox game Minecraft has announced a ban on NFTs and asked creators to read the guidelines.

According to the Minecraft development team, this is“To ensure a community where everyone has access to the same content.”It is said that it is from

“NFTs can create models of scarcity and exclusion that go against our guidelines and the spirit of Minecraft.”and stated the philosophy,The introduction of NFTs into Minecraft and the integration of the NFT’s underlying blockchain technology inside client and server applications is not permitted.stated.

According to the development team, we’ve recently seen companies start implementing NFTs related to Minecraft world files and skin packs, as well as creating collector’s NFTs, allowing players to earn NFTs through activities they do on the server. , or other actions such as allowing players to earn Minecraft NFT rewards through activities outside the game.

but,Some third-party NFTs are unreliable, may cause losses to players who purchased them, may disappear without notice, and are artificially or fraudulently inflated at prices. Some examples have been soldsaid the development team.

“The above example use of NFTs and other blockchain technologies creates digital ownership based on scarcity and exclusion, which is inconsistent with Minecraft’s values ​​of being creative and collaborative.NFTs do not cover all communities and create haves and have-nots. We believe that the speculative pricing and investment mindset surrounding NFTs distracts from the original focus of game play, encourages profit seeking, and is inconsistent with the long-term enjoyment and success of players.‘ said.

The guidelines will be updated soon, but in advance we want to share Mojang Studios’ thoughts on Minecraft and NFTs.
Especially if you are a player or creator who is actively involved in buying, selling or trading NFTs using Minecraft, please check this article (excerpt from English article). https://t.co/tSnVz1QM5S pic.twitter.com/mlFcIqgOtF

Because money can cause war

Contrary to the world view of “Minecraft”
This is what it takes for Minecraft to be Minecraft.
Whatever you do, don’t create an economic market by multiplying NFT and blockchain.
Nintendo wouldn’t easily adopt NFTs, would they?

The billing element that originally makes a difference in the game experience is a violation of the guidelines.

I’m looking forward to the NFT itself, but I personally like this news because it’s sad that everything will become a money-making story

Considering the balance with the gambling crime, the gameplay and billing system are actually limited. Well, one insight is that our game doesn’t adopt it.

this is good You can concentrate on the game without worrying about the hassle of purchases and fluctuations.

Am I the only one who thinks Minecraft has a web3 feel to it?

I think it’s the right decision in the current situation where it doesn’t contribute to the game experience and can’t find any meaning beyond speculation.

The accounts that regret this are all shady people across the board.

If you make an original block or something, you can make a lot of money.
Moyan who prioritizes the idea of ​​​​minecraft is Gusei…

The current NFT is not creative… it’s full of garbage…

What do you mean? ?Some people may say, but in a nutshell
“It’s not a game to play, it’s a game to make money, so it’s prohibited to make limited Minecraft items and sell them.”
Officially announced, it is a big topic overseas where there are many anti-NFT