The “game development” budget continues to bloat, but what kind of impact will it have on the player side? → It may lead to the decline of the game market…

The ever-expanding budget for game development Advantages for players, but pitfalls for the market 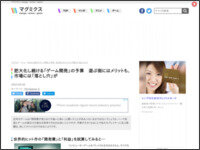 ・The quality of the game is far from what it used to be, and with the high performance that comes with the times, players can continue to experience many times more fun than before.

・At the same time, the game’s “development cost” and “development period” are increasing, but what kind of impact do they have on players?

・For reference only, in the case of home video game consoles in Japan, about half of the development companies make games with a maximum budget of around 50 million yen, and the rest spend more than that.

・And the image of a handful of companies spending 1 billion or 2 billionIt has become.
(Reference: “CESA Game White Paper 2021”)

・When it comes to so-called “AAA titles” overseas, they are made with a huge development cost of 10 billion yen or 20 billion yen.

・From the game development side,In order to recover the soaring development costs, we want many people to buy it, so it is natural to want to release hardware that is more likely to sell, which leads to the concept of “multi-platform”.be a factor.

・The game market is expanding all over the world, and North America, Europe, and China are especially important markets.

・Developers will make games that will be accepted by a larger market,On the contrary, some say that it is causing the decline of the game market.Say.

・Games are getting into a rut, and similar games, series, and remakes are increasing.From.

・It can be said that the future of the policy of selling to a large market in order to recover a huge amount of development costs and mass-producing products that are known to sell there will be tapered off in the future.

・One of the positive aspects of the impact of soaring development costs and prolonged development periods for players is the multi-platform development of games.ButWhat could be the downside is that the game is getting stuck in a rutand