The basic free version of “Megaton-class Musashi Cross” PS4 / Switch and PS5 version will be delivered on the same day!The delivery date has been postponed to December 16th. 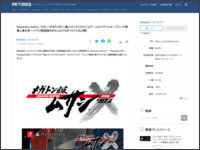 Today, the original opening video of “Megaton-class Musashi X (Cross)” “Steel Man Awesome!” has been released on Level-5’s official YouTube channel! In this opening video, voice actor Shunsuke Takeuchi is in charge of singing, imagining the character he plays, Ryugo Hijikata. It is an impressive song with a powerful singing voice and a melody full of Japanese, such as the sound of drums. Please pay attention to the robots that appear one after another in the video and run on the battlefield!
https://www.youtube.com/watch?v=GqJLojO2otY

・The new key visual for “Megaton Class Musashi X (Cross)” drawn by Eiichi Shimizu and Tomohiro Shimoguchi has been released!

The 3rd key visual of “Megaton-class Musashi X (Cross)” by Eiichi Shimizu and Tomohiro Shimoguchi, who are familiar with “ULTRAMAN”, has been unveiled for the first time!
Go Nagai’s original “Getter Robo” and “Mazinger Z”, and the main robot “Musashi” of this work are placed side by side. In this game, it is possible to actually operate these robots. Stay tuned!

“Megaton-class Musashi X (Cross)” will be available on PlayStation R5 from the start of distribution on Friday, December 16th. Please enjoy the story and battles of this work on PlayStationR5!

“Megaton-class Musashi X (Cross)” will be distributed for free on December 16, 2022 (Friday)!
In this work, in addition to the story that the main characters unfold, you can enjoy customization and exhilarating battles unique to giant robots. Acquire new equipment by completing missions and create your own strongest aircraft! In addition, “Megaton Class Musashi X (Cross)” includes a lot of advanced content such as cooperative play with up to 3 people using online or local communication and a battle mode that can be enjoyed with a maximum of 3 to 3 new elements!