Is the reward only for promoting the game?Tesla was asking the developer of her masterpiece ADV ‘Her Story’ to add an in-car game for free 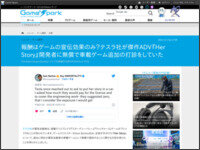 ・Tesla’s electric car is known to be able to play “Stardew Valley” and “The Witcher 3” on the on-board display. Game creator Sam Barlow said about her “Her Story” that he worked on.In the past, I was approached about providing it as an in-vehicle game for the company’s electric vehicles free of charge.It revealed that.

・Sam Barlow, who was approached by Tesla, asked, “How much will you pay for the license fee and the development cost for porting?”Tesla replied that they would not offer any financial compensation, and that they should consider the “increased exposure” of the film.It says.

・In response to this post, Mr. Cabel Sasser of overseas publisher Panic said, “Untitled Goose Game-The mischievous goose has arrived! About ”A similar approach has been made by TeslaI am replying.