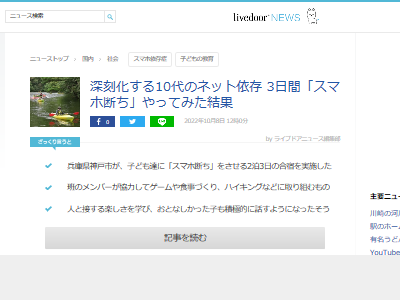 Learning the joy of interacting with people, the child who was quiet began to speak actively

If I was a teenager now, I would never have gone to college.

Ah… I wonder if I’ll be dependent on YouTube if I include it. I feel like I’m most actively dependent on it in between work. If you don’t manage to dissipate your anger, it’s dangerous in reality.

A smartphone is just a tool. It’s up to you how you use it.

Old men around here should give up TV, cigarettes, and pachinko for about three days.

Originally, parents and guardians should do (´・ω・｀)
But my parent’s generation is also a smartphone addicted to the internet.

I think it’s healthier than the elderly who are dependent on TV…?

When I read it, there are people who are in their teens and have charged 1.8 million, which is amazing…
Where does that kind of money come from?

Heck, people say I’m a heavy user just by looking at my smartphone for 4-8 hours.
If you’re a heavy user with this, people who work and people who watch TV are some kind of addiction, right?