[Super expectations]Hollywood movie “Super Mario” trailer will be released for the first time on October 7th at 5 o’clock! ! 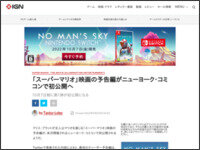 The trailer for the Super Mario movie starring Chris Pratt is set to premiere at next month’s New York Comic-Con.

According to what was announced on Twitter, the first teaser trailer will be released at the venue on October 7, 2022 at 5:00 (Japan time).

New York Comic-Con attendees will be able to see it on the Empire Stage inside the venue, according to the official Comic-Con website.