Steam to discover the best sellers on its platform during 2017

The Witcher 3, H1Z1, PUBG and Divinity: Original Sin 2 of the most lucrative games generated last year

Steam, the world’s largest digital game distribution platform for PC, has over the years learned which titles have become the best sellers. Valve has 100 games in the form of gross revenue generated during 2017 and covers them in four categories: Platinum for the first 12, gold for the next group and continued with silver and bronze. With this system there is no real classification, we just know approximately where each game is located.

In Platinum we find some surprises like Divinity: Original Sin 2, H1Z1 y Ghost Recon Wildlands. There are also launches that have also been around for some time in the market The Witcher 3, Grand Theft Auto V, Rainbow Six Siege y Rocket League but which continues to generate great benefits. As it was to be hoped, PlayerUnknown’s Battlegrounds also appears in this category as we already know that it has sold 30 million copies, in addition to being played with multiple contemporaries on the platform, and which recently built a new record reaching 3,080,769 players. 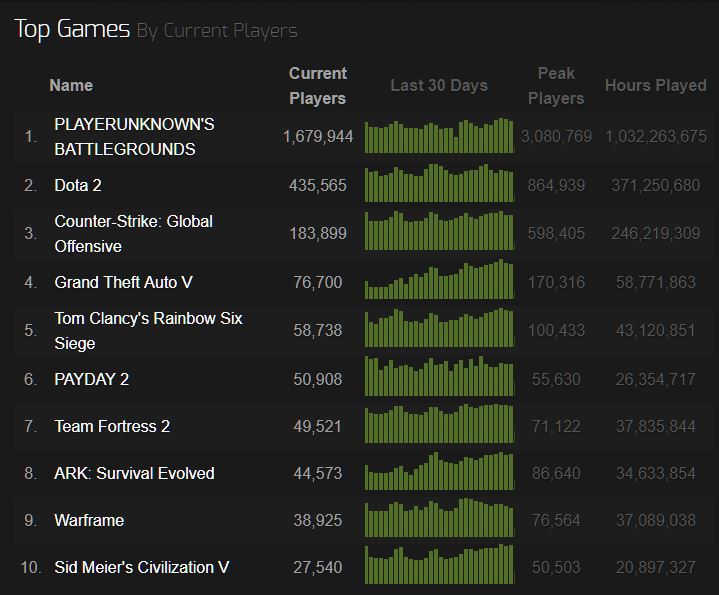 On the other hand, we also have titles free to play such as Dota 2 and Warframe, which are a better example of how free titles can generate gross revenue equivalent to games sold at full price and which expand their content through DLCs.

We leave you the complete lists for each category.