“Splatoon 3”, the official data of the festival revealed the weapon usage rate of the top players! The hated washing machine “Screw Slosher” and that weapon are dangerous…! ? 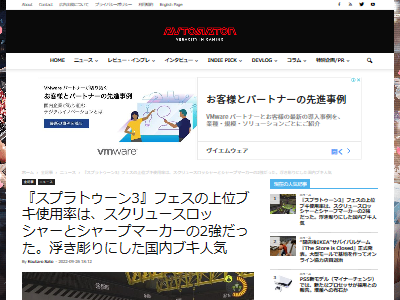 (Part of the following, full details to the source)

The first festival after the release of “Splatoon 3” will end at 9:00 on September 26th.Attention is focused on the weapons used by the top festival powers of each camp, which were announced after the festival.

In “Squid Ring 3” implemented in the Nintendo Switch Online iOS / Android application, in addition to the results such as the percentage of votes for each camp, the top 100 festival power players of each camp called “Fest 100 Ketsu” Names and weapons used are published.

As a result of the author summarizing the types of weapons used by top players,Each faction has 4 or more top 10 users of screw slosher. Next, sharp markers stand out. Of the 30 players, 13 were screw slosher and 8 were sharp marker.

Looking at this up to TOP 100, there are 23 screw slosers in the tool camp, 35 in the food camp, and 33 in the killing camp, for a total of 91 people. There were 32 Sharp Markers on the Tools camp, 22 on the Food camp, and 28 on the Killer camp, for a total of 82.
These two types alone make up more than half of the top 100 for each faction.This is the aggregate result.

This is coming down

The mystery judgment of the screw is too strong

The screw was balanced because the special was weak, but it was because I put on a nice ball w

Eh, is my favorite gun’s sharp marker that popular…
I don’t like it because it looks like it will be revised downward if it is said that it is too strong

Unusually large bullets for washing machines, amazingly strong Nice Dama
A sharp and powerful crab that has a super strong coating and one hit with a lag

I’m glad I was in Wakaba~

Please put the washing machine down.

Why don’t you put a strong subsp on a strong main, didn’t you learn from the previous game Garon?

It’s the first candidate for punishment.Strong weapon nerf is already Korigori according to the strong

Washing machine and then Shapma
Lacto is allowed

Why is the sharp marker still a healthy impression even if the usage rate is close?