Splatoon 3 is selling like crazy! The number of domestic sales in the first three days after the release of software for Switch reached a record high! → Click here for the number of sales that are too dangerous 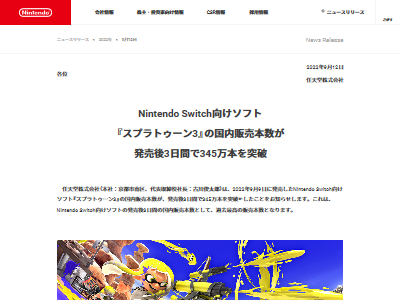 Nintendo Co., Ltd. (Headquarters: Minami-ku, Kyoto, President: Shuntaro Furukawa) announced that the number of domestic sales of the Nintendo Switch software “Splatoon 3” released on September 9, 2022 will beSold over 3.45 million copies in 3 days after release*1 We will inform you that you did. This is the number of domestic sales of software for Nintendo Switch in the three days after its release.Record number of units soldbecomes.

*1 According to our research.The number of sales includes the package version and the download version.

The content has already surpassed Dragon Quest and Monster Hunter.

This is in the DL version

Splatoon 2 sold 670,000 copies in Japan three days after its release date…
It’s really amazing that it sells 5 times faster than its predecessor

It’s a number I’ve never heard of recently.
If you think about it simply, there are still as many people playing home video games as there were in their heyday.
I’m honestly surprised in the smartphone era these days

Although Nintendo will release sales figures, it would be strange not to announce it if this figure is out.

too much sold grass

What is this number wwwwww
No matter how much you sell too much! Seriously amazing! ! !

While games for smartphones and PCs are growing, this number of sales is really amazing
It makes me feel that it can still be used as a deferment