PlayStation is currently developing a new IP, AAA, to be announced soon, according to reliable sources 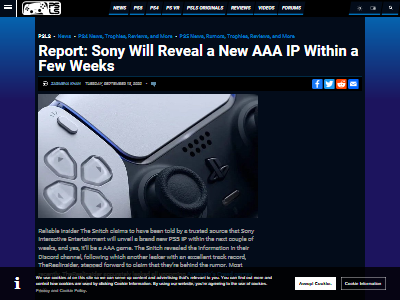 The Snitch, who has continued to provide numerous accurate leak information so far, introduces stories from “reliable sources”. Apparently, SIE is developing a new IP AAA title for PS5, which will be unveiled by October 1st.

This source later turned out to be TheRealInsider, who is also a well-known leaker for the accuracy of his information.

As it is a new IP, it is unknown what titles will be released at this time.

Just got word of a AAA PlayStation New IP being revealed in the next 2-3 weeks. You know what that means… More details to come.

And yes, I’m the one who sent @insider_wtf the DM.

“I heard that a new IP AAA title for PlayStation will be announced within two to three weeks. Please look forward to further news. By the way, I sent Mr. The Snitch a DM with a tip.”

Because the new IP AAA is Sony’s true value! I’m really looking forward to it!

Is it Bend Studio?

Even in State of Play or TGS, there is not much information that can be released without an announcement lol

There are rumors of a unique event, and there is no doubt that it will be announced flashy! !