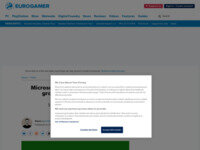 Spencer acknowledged that fees could rise in the future

・According to Microsoft, as of January 2022, Game Pass has over 25 million subscribers.