[Sad news]The strongest portable game machine “Steam Deck” where you can play PC games, the specs will be changed secretly 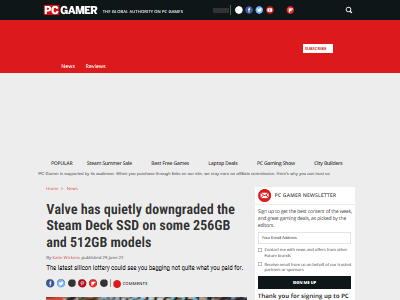 ・It turned out that the specifications of the portable machine “Steam Deck” had been changed without notice.If you’re unlucky, you may be sent a machine with a “cheap” SSD.

・The specs have changed for the 256GB and 512GB models

・These two models have been equipped with “PCI express 3.0×4” so far, but it turned out that “PCI express 3.0×2” began to appear around May. Having 2 lanes means that the data transfer speed is theoretically halved

Did you think you wouldn’t find out

Going from 4 lanes to 2 lanes is fine, but it’s strange that they’re the same price, right?

Theoretically the speed is halved, but in practice I don’t think it will be much of a problem.

Even though the price is the same, different SSDs are loaded depending on the individual… I don’t know if it will affect the actual play, but I wouldn’t like it if I got a cheaper version.
Or is it okay to do this after the release?

Nintendo Switch is recommended for you! God games can be played on mobile devices as much as you want! Only love Nintendo!