[Sad news]Skyrim’s sequel “TES6” will be exclusive to Xbox 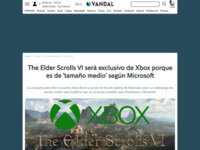 The Elder Scrolls VI was announced at E3 2018, but the reality is that we know very little about it.

A recent filing by Microsoft to UK regulators regarding the Activision Blizzard acquisition issue reveals a few things about The Elder Scrolls VI’s exclusive sales on Xbox and PC.

・In the document, Microsoft calls The Elder Scrolls VI a “mid-range video game” to justify its lack of a PlayStation or Nintendo console release.

・The company cited an open-world action role-playing title as proof that it wouldn’t prevent the launch of Call of Duty on the aforementioned console. The Call of Duty franchise has significant mass market appeal, highlighting medium to low potential value as an exclusive distribution.

・Xbox boss Phil Spencer said in mid-November last year that exclusive distribution of The Elder Scrolls VI wasn’t a “punishment to other platforms” and that “all platforms can continue to grow”. showed that

There were several leaks from insiders at the end of April this year, suggesting that the next installment of The Elder Scrolls franchise will be released in 2025 or 2026.