[Sad news]PS4 version “Persona 5 The Royal”, upgrade to PS5 version turned out not to be compatible 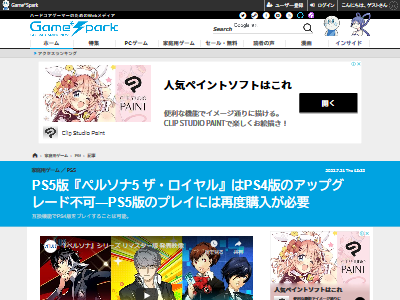 Released in 2019From the PS4 title “Persona 5 The Royal”, it has become clear that it is impossible to upgrade to the PS5 version released on October 21st.

You can play the PS4 version on PS5 using the compatibility function,Need to purchase again to play PS5 versionbecomes. In addition, the difference between the remastered version and the PS4 version has not been clarified.

persona 5
Moreover, there is no upgrade support at full price sale

Even Falcom supports upgrades for 110 yen.

As expected of Atlas! !
I believed that there was no way I could deal with a free or 100 yen upgrade!
That’s what Zeni Geba Atlas is all about! I’ll keep up with you for the rest of my life!

Make me buy the software every time

Atlas alone is too old-fashioned to think about this kind of thing
Anyway, 6 doesn’t even support DLC, and you can see the full version and 100 hours of redoing

Is there a remaster now?

Well, people who have played P5R shouldn’t have to buy it, right?
It will also be available on Switch and PC, so it’s aimed at new players who haven’t played it yet.