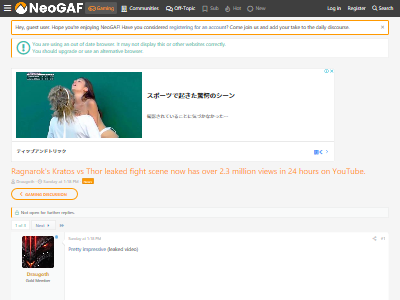 ・It turns out that the latest work in the series “God of War Ragnarok” was sold at an overseas retail store two weeks before its release.Creator Cory Barlog has warned fans not to spoil the story.

・However, it seems that videos containing spoilers have already begun to appear on the Internet.

・According to Tom Hernderson, a journalist, the Kratos VS Thor battle scene was posted on YouTube, and it is known that it was played 2.3 million times in 24 hours.

・It’s a scene that’s obviously spoiled, but Hernderson wonders, “Why didn’t Sony take it down for copyright infringement?”

You don’t need to buy the game if you watch the video! !

Why are people who are thinking of buying watching spoilers? You don’t want to play it as a game, do you?

It seemed boring, so I’ll pass it on this time

i will buy it when it goes on sale

God of War, which will be released soon, is it serious that it’s already flagged…
Moreover, it’s a Sony rage project that videos containing spoilers are also up

There is a possibility that it will affect sales normally, and there are precedents that have been sued for this kind of thing
Why did the store sell out so quickly?