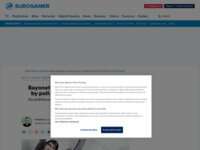 ・Digital Foundry reviewed Bayonetta 3 for Switch.Analyzed the performance of this work

・Bayonetta 3 is a great action game, but the Nintendo Switch hardware can’t handle the scale of the game

・Textures are low-res and often gritty, image quality is subpar, and performance is erratic

・With the exception of the PS3 version of Bayonetta 1, it’s worse than other Bayonetta games, and the results are disappointing.

・When it comes to staging, simply saying “inconsistent” would be the most appropriate expression.Visuals vary from beautiful to ugly depending on the chapter

・Looking at the three Bayonetta games, I feel that everything in Bayonetta 3 has grown in scale.

・Compared to the previous two works, the appearance frequency and variations of small-scale enemies have decreased.Regular battles will be bigger, with regular mammoth bosses

・TV mode resolution is up to 810p.It has increased from the 720p of the previous work “Bayonetta 2” Switch version

・However, unlike the previous work, the portable mode is lower than 720p, and sometimes close to 480p

・The fields are surprisingly bland and dry. The entire city of Tokyo is covered with monochromatic textures and there is no lighting.I’m not expecting high-end real-time lighting, but I think the previous games did a better job with pre-computed lighting settings.

・It has a beautiful feel, but the level of disappointment is overwhelmingly higher in terms of visual quality and overall coherence.

As per the tradition of the series, cutscenes will be 30fps with better visual quality

・As long as the frame rate is stable, I wouldn’t worry about the performance issues, but unfortunately the reality was not as good as I expected.

・The gameplay part is aiming for 60fps, but 60fps is rarely reached in normal play.As a result, I got a more slender impression than I thought.

・I feel that PlatinumGames may have gone too far in closing the deal for the Nintendo Switch hardware.In fact, I had similar performance issues with The Wonderful 101 on the Wii U, with very few moments of a smooth 60fps experience.

・Considering the history of porting Platinum, it is conceivable that Bayonetta 3 will be upgraded for the next-generation Switch.Enjoying this title at this point requires a certain amount of flexibility on the part of the player

・I think platinum technology really needs a complete overhaul.It’s difficult to maintain the technology in-house, and considering the cost, it’s a great result, but I feel that the switch’s hardware strengths are not being utilized.