[Sad news]Microsoft admits that PlayStation is better than Xbox 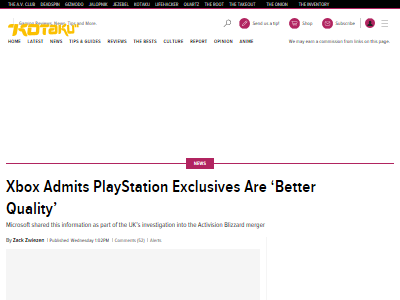 Microsoft recently responded in writing to questions from the UK’s Competition and Markets Authority (CMA), which is investigating the proposed acquisition of Activision Blizzard. By presenting various data, we have shown that this acquisition will not hurt Sony or Nintendo.

In the document, Microsoft“Sony has more exclusive games than Microsoft, many of which are better quality than their own.”Claimed. In terms of sales, it also surpasses its own first party, he added.

It seems like Xbox is trying to paint a picture of a small brand with marginal sales and no real power compared to Sony or Nintendo.

I don’t recognize the official lol

↑ Xbox is for Game Pass, right? Like the Vikings, they chose quantity over quality.In that sense you have nothing to be ashamed of

But both are beaten by the switch lol