[Sad news]Manga artist Hajime Isayama “Attack on Titan is the first and last work. There are no plans for the next work.” 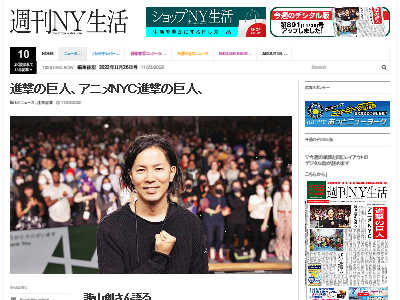 Anime NYC, a festival of pop culture such as Japanese anime, manga, and games, was held for three days from November 18th to 20th at the Jacob Javits Convention Center in Manhattan.

On the 19th, Hajime Isayama, the creator of the manga “Attack on Titan”, which became a worldwide hit, held a talk show at the special event hall, and the appearance of himself was met with great cheers.

Mr. Isayama decided the ending of “Attack on Titan” from the beginning, but as a result of changing the main character Eren, who became a “good guy”, he said, “I was drawing while thinking that the last would be difficult and it wouldn’t go well. I’m sorry,” and cheers and applause erupted from the audience.

In response to the question, he said that his favorite character is Jean, that Hange’s model was from a strange friend, and that he enjoyed drawing Keith’s past.

Unfortunately, “Attack on Titan” is the first and last work, and he also mentioned that there are no plans for the next work.

Is this really true?

Liar
Are you still before 40? Even though there are no problems financially, what are you going to do from now on?

Tente Isayama, retiring… Unlike Gotouge Koyoharu, if he himself declares it, it’s almost certain…

An image that a screenwriter is likely to do.

Eh… it’s a pity to say such a thing.
But if it’s not a work that surpasses attack, I don’t bother to draw it.

There’s talk of Gotoge-sensei retiring too, so I wonder if it’ll be difficult for him to make a second game after a big hit.
But it’s okay to read it all the way through, so I want to read it again