[Rumor]Is “Uncharted” coming back? ? It turns out that Naughty Dog and Sony’s new studio are developing a new project for a popular series! 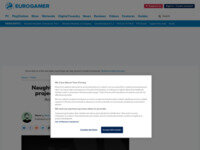 ・Naughty Dog, creators of Uncharted and The Last of Us, are working with a number of other PlayStation Studios teams on a mysterious new project for a ‘beloved franchise’, it turns out.

・According to a newly discovered Sony job posting,“We are looking for a game design intern to work at our new PlayStation Studios based in San Diego, California, working with Naughty Dog on developing an exciting new project for a popular franchise.”is described as 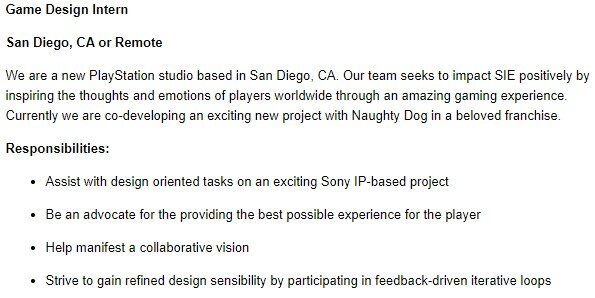 Details of this new studio are unknown, but it’s likely that it’s a “new in-house game development team” based in San Diego that Sony mentioned in a separate job posting earlier this week.

The job ad will initially see Naughty Dog and Visual Arts (Sony’s San Diego-based support studio, most recently behind The Last of Us: Part 1 remake) working together on a new “high-profile” project. was clearly stated.However, a subsequent edit removed the explicit mention of the visual arts, for reasons unknown.

It’s still unclear what Naughty Dog’s new collaboration will look like, butSince last year, signs have been found suggesting the possibility of an Uncharted revival

According to a Bloomberg report last year,Visual Arts wanted to remake the original Uncharted, but the project was deemed too expensive and time-consuming, so it ended up being a remake of this year’s The Last of Us.

・According to Bloomberg, Bend Studios, the creators of Days Gone, was at one point put in charge of a new Uncharted movie under Naughty Dog’s direction.

Of course, other Naughty Dog series will be back in the limelight in the not too distant future

Sony’s live-action Uncharted director Ruben Fleischer revealed earlier this year that he would be adapting Jack and Daxter into a movie, and Sony may want a new game to go along with it. There is also

Whatever the new collaboration with Naughty Dog ends up being, it’s clear from recent ads that they’re starting to gear up behind the scenes.