[Reverse zaya]Xbox series, deficit of $ 100 to $ 200 every time one unit is sold MS “Assumed to be recovered from peripheral equipment sales etc.” 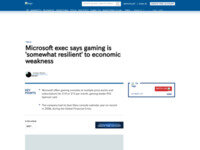 ・Microsoft’s divisional revenue forecasts released on Monday were generally below market expectations.Affected by sluggish PC sales and a slowdown in the cloud service sector due to the economic downturn

“Microsoft is allowing people who want a console to choose how much they want to buy it,” Spencer, the company’s head of gaming, explained today.

・Spencer said Microsoft is paying between $100 and $200 per game console and hopes to recoup that in peripheral sales and store purchases.