Regarding FF7 Rebirth, “Even though it’s a trilogy, the axis of the story won’t change, and we won’t cut it. Don’t worry, it won’t be a digest.”

■ Past articles
[Breaking news]Remake sequel “Final Fantasy 7 Reverse” will be released next winter! ! 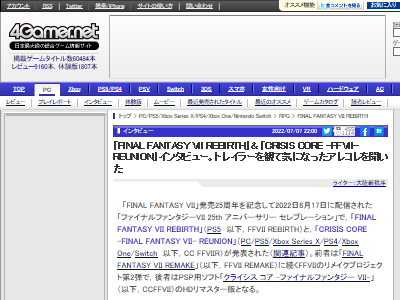 About the story and volume of FF7 Rebirth

Executive Producer Yoshinori Kitase
It doesn’t deviate greatly from the original, so the feeling you can enjoy is also reproduced.FFVII REMAKE’s Midgar also took on that shape as a result of aiming for an evolution that would satisfy everyone who played the original work, but FFVII REBIRTH was also made with care so as not to destroy the image held by the fans of the original work. . Therefore, the volume is great.

Creative Director & Character Designer Tetsuya Nomura
It seems that there are some worries such as “Can I draw it in a trilogy?”, “Is it going to be a digest?”Of course, there is a feeling of liberation after leaving Midgar. On the contrary, I think it gives the impression that “We really managed to handle so much in such a short amount of time.”

The axis of the story has not changed. As for the new mysteries that are different from the original, I think everyone who played the original will be able to enjoy it freshly.
On the other hand, there are some changes to the game progression. There may be some people who play and think, “Was that place deleted?” There are places where the order to go has changed accordingly, but basically it is a policy not to delete.

Thanks for mentioning the volume

I’m looking forward to it, but I can’t get a PS5

It was a good interview. It is reassuring to hear the word “do not give up”. I felt a little relieved (half in doubt)

It turned out to be a trilogy, and it took one work just to escape from Midgar, so there were worries that the story would be greatly cut from the original in the future…
Is it okay to expect this? ! ?

>A new mystery different from the original

That’s important! Why did Zack… and what happened to Aerith’s event…
Ooooooooo I’m curious! Can’t wait already!I’m begging you, please don’t postpone it and release it properly

■ Related articles
When it turns out that “FF7 Remake” is a trilogy, fans lose their hearts… Voices of disappointment say, “The story will be greatly cut.”