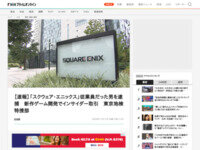 ・Game company over development information of new game for smartphonesTwo former Square Enix employees were arrested by the Tokyo District Public Prosecutors Office on suspicion of insider trading.it was done.

Two people, Taisuke Sasaki (38), who was an employee of Square Enix, and Fumiaki Suzuki (40), an acquaintance, were arrested by the Special Investigation Department on suspicion of violating the Financial Instruments and Exchange Act.

・Sasaki was working at Square Enix around the end of November 2019, when Square Enix and an online game production companyI learned about a new game for smartphones jointly developed by Aiming.about it.

·and,Before that information was announced, about 162,000 shares of Aiming were purchased for a total of about 47.2 million yen.has been accused of insider trading.