“PSVR2” announced forecast to sell 3.6 million units in 2 years!Sales are expected to surpass the previous model, and the VR market is growing again this year 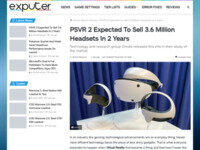 ・Technological advancement is a daily occurrence in an industry such as games. Newer, more efficient technology replaces less-lit gadgets.As everyone expected when virtual reality first came out, it hasn’t turned out that way.

・While many still expect VR headsets to be the future of the industry, growth is a bit slow. Many factors are at play, including price and the low number of AAA games.But that doesn’t mean virtual reality won’t sell

・Headsets such as the Oculus Quest and PSVR have long attracted attention. With the imminent release of PSVR 2, virtual reality’s market share is only increasing.A Research Firm Predicts PSVR 2 Unit Sales, And Has Good Results

・Technology research and advisory group Omdia has announced that PSVR 2 will sell 3.6 million headsets within two years of its launch.PSVR headsets will sell more than their predecessors, according to the study

・PSVR has sold 3 million headsets in its first two years, so PSVR 2’s numbers have improved. If PSVR 2 sells as expected, we can expect a 7% install rate among PS5 users.Sony has full confidence in this product, if not a huge increase

・On the other hand, the cumulative sales volume of Meta Quest is expected to reach 20 million units by 2022. According to Omdia, the headset is the largest VR ecosystem on the planet. Sold 76% of all headsets sold in 2022, boasting overwhelming market share

However, according to this study, global adoption of VR is still a long way off. Nearly 72 million headsets are expected to be in use by 2027, far fewer than any other high-tech device.With 6 billion smartphones, 3 billion PCs, and 250 million game consoles, it will easily surpass VR headsets.

・The biggest use of virtual reality headsets is games. About 90% of people use VR headsets for gaming, and social VR apps play a big role in that. VR Chat, Rec Room and Meta’s Horizon Worlds use gaming as an integral part of the future

・Despite myriad economic challenges, the VR market continues to grow this year. Omdia estimates that 12.5 million headsets will be sold in 2022, with $1.6 billion spent on VR content.So, even if VR’s dominance isn’t coming for a while, it’s doing pretty well on its own.