“PS5 & Xbox SX may be the last home game machine”


PS5 & XSX will probably be the last stationary machines 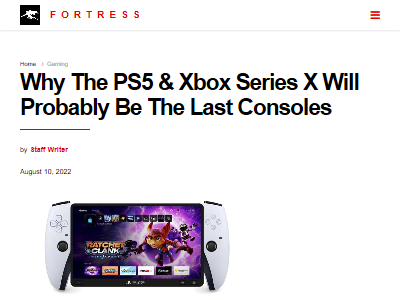 ・PS5 and Xbox Series X may be the last conventional home game consoles due to the remarkable progress in technology such as cloud and mobile games.

・Mobile games target the casual demographic, but in this era where everyone has a smartphone, the number of users is overwhelming. The reason Sony withdrew the Vita was because they felt it would be futile to continue competing in this large market. The Nintendo Switch is smart about that.It is a good combination of stationary and portable devices, and protects itself from being exposed to the threat of mobile games, which are the biggest enemy of stationary devices.

・PC games are also a big threat to home consoles.The handheld Steam Deck can provide an environment where you can easily play PC games anytime, anywhere, and cloud games also make you feel the possibilities of the future.

・For both Sony and Microsoft to survive, it may be better to explore a hybrid with a portable device.

Okay, I’ll get you some medicine.

You said the same thing when you were on PS4.

Ah, PS5 and XSX are not selling at all, so the times don’t demand stationary machines.

It would be interesting if Sony or MS released a hybrid with a portable device, but…

Home video game consoles that are out now, this will probably be the last console…

Cloud, PC, mobile, VR, etc…
Even if it spreads in various ways, it won’t be long before stationary machines disappear.
When the number of people who want to play games on consoles disappears, something might change.

The drama model of “The Last of Us” is one way or the other fashionable! → Something unbelievable occurs wwwww