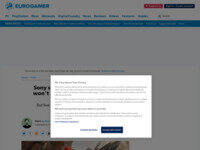 ・PlayStation Studios general manager Hermann Hulst has revealed that it will be “at least a year” before Sony’s first-party games hit the PC.But the live service game may launch on PC sooner

・“Releasing one first-party AAA title for PC doesn’t necessarily mean that every game out there will be for PC.”It has said

・Mr. Hulst said in a video interview“For the team, it’s really great to see their great work coming to PC. Going forward, excluding live service games, both PlayStation and PC will have a gap of at least a year or more. think”said

・In the case of live services, it may be possible to play on PC and PlayStation platforms when the service starts.