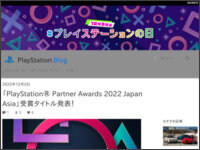 Today, December 2nd (Friday), the award ceremony for the “PlayStationR Partner Awards 2022 Japan Asia” (hereinafter referred to as “PlayStation Partner Awards”) was held, and the award-winning titles of the PlayStationR5 and PlayStationR4 formats that were hits in the past year were awarded. Therefore, we will inform you about all the titles that won each award.

The PlayStation Partner Awards began in 1994, the year after the birth of the PlayStation R, as the PlayStation Awards, with the aim of paying tribute to the creative activities of creators and honoring the variety of hit titles that have excited the PlayStation. It will be held for the 28th time this year.

It will be awarded to the top two titles in terms of global sales (*1) from October 2021 to September 2022 among the titles developed by software makers in Japan and Asia.

Among the titles developed by software makers in Japan and Asia, titles that rank among the top in terms of worldwide sales (*1) from October 2021 to September 2022, and that have produced particularly noteworthy activity results. Given. (*2)

Among the titles developed by software makers in regions other than Japan and Asia, this award will be given to the top sales (*1) in Japan and Asia from October 2021 to September 2022.

Awarded to the highest worldwide sales (*1) from October 2021 to September 2022 for titles jointly developed with SIE Worldwide Studios.

Out of the top 30 titles by total game play time, the top 5 titles selected by user votes in Japan and Asia will be awarded.