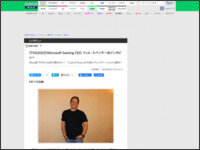 Below is a summary of some excerpts from the interview

・(Regarding FF14 not yet playable on Xbox)

Of course, we haven’t given up yet. This is Microsoft and Square Enix’s commitment to game fans, and we will continue to coordinate.

・(What Xbox fans want is an exclusive title from Japan, not a follow-up to PS5 or Switch)

This time, I met with many game creators, including Mr. Kojima of Kojima Productions, and talked about offering unique titles on Xbox. I also understand that many game fans want that. As a common awareness of the Xbox team, we are focusing on creating such titles, so please look forward to it.

(smile). I have nothing to say at this time.

Let’s get back to the “scalebound” question, shall we? (smile)

・(Will the Call of Duty franchise be playable on PlayStation after the acquisition of Activision Blizzard?)

We believe that “Call of Duty” will remain on PlayStation for the foreseeable future. On the other hand, the contract is still in progress, but when those procedures are completed, the “Call of Duty” series will be compatible with Game Pass. This is what we want, not banning the PlayStation from Call of Duty.