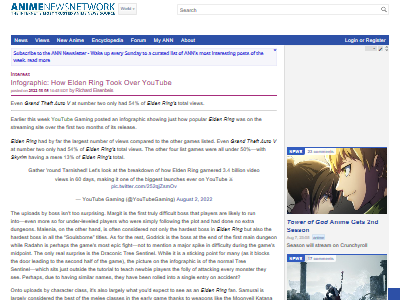 YouTube Gaming posted this interesting infographic.Elden Ring was the most viewed game in the two months since its releasewas found to shine.

The number of views of the same work is overwhelming with 3.4 billion times, and it is far away from “GTA5” which is the second place with 1.9 billion views.

Gather ’round Tarnished! Let’s look at the breakdown of how Elden Ring garnered 3.4 billion video views in 60 days, making it one of the biggest launches ever on YouTube ⚔️ pic.twitter.com/252qjZsmOv

According to YouTube Gaming,The boss with the most uploads is “Margit, the Abominable Demon” that players first face.. Her most uploaded identity was “Samurai”.

You guys love Elden Ring too much

As a longtime From fan, I’m happy with the popularity of Elden Ring.

↑This year it’s decided to be Stray

I can’t wait to see Fromm’s next work

Elden Ring is the number one video game on Youtube in the two months since its release…and it’s overwhelming.
Right after the release, it was like a festival where all the gamers were playing Elden Ring.

There seems to be a lot of people who were fishing for videos for strategy information purposes.
It will sell over 13 million copies.