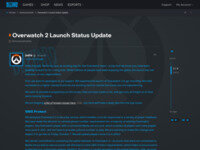 ・Hello, Heroes. Yesterday was an exciting day for the Overwatch team that you’ve been waiting for a long time.While millions of people are enjoying the game, the launch did not live up to your expectations and ours.

First of all, I would like to apologize to all players. We expected a smooth launch for Overwatch 2. We hold ourselves to a higher standard and are working hard to resolve the issues you are experiencing.

We want to be transparent about the issues, the fixes we’ve made so far, and let you know how we’re moving forward.

We maintain a list of known issues here, but we’ll dive deeper into the most important issues here.

“Overwatch 2” was designed on the premise of a live service, and it is possible to respond to various player feedback.We have decided to remove the phone number requirement for the majority of existing Overwatch players. Overwatch players with connected Battle.net accounts, including all players who have played since June 9, 2021, will not be required to provide a phone number to play. This change will be implemented on Friday, October 7th. We will notify all players as soon as it is implemented.

Accounts not connected to Battle.net or new accounts must meet the SMS Protect requirements. If a player is found to be behaving badly, that account may be banned regardless of whether or not they have a new account.

We will continue to listen to your feedback and make further adjustments if necessary.

You won’t lose any items or progress, but we’ve seen some players lose some or all of their collections when they log in.

In the other half of reported cases of this issue, items from the original Overwatch appear to take longer than expected to transfer and reflect in Overwatch 2. In either case, no player data will be erased or lost. A client-side fix for this issue won’t be available until next week, so we’re working on a server-side fix and will update as soon as we have more information.

We encountered another issue with account merging where players who merged their console and PC accounts were unable to log in. This bug is now resolved.If you were watching our community streamers on launch day, you may have noticed that many people were having trouble logging in, and this bug was the main reason for that.

Illegal Locking of Heroes and Items for Existing Players

This is a separate issue from account merging, but the player experience is the same as above, showing locked heroes and items that should have been unlocked for existing players. These cases are almost certainly related to the new First Time User Experience (FTUE) flow being incorrectly applied to existing players. In most cases, re-logging into the game has been confirmed to resolve this issue. If you’re still having issues after following these steps, please create a support ticket.

On launch day, DDoS attacks exacerbated these issues. DDoS attacks didn’t cause these issues directly, but they made the environment in which we work more difficult. I haven’t been attacked since.