[! ? ]Only one person in the world can go to “Nier Automata”?A hidden door was reported and caused an uproar A month later, a video of what was happening beyond it was posted, and the question of whether it was fake or not caused a big reaction overseas.


The existence of a “mysterious door” is reported in “Nier Automata”. A church door that only one person in the world claims to have opened – AUTOMATON 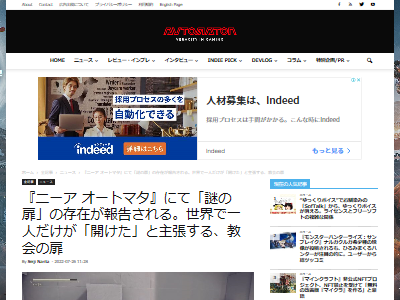 (*Part of the following, full details to the source)

In “Nier Automata”, the community is in an uproar with posts suggesting “unseen secrets”.

In early 2021, a “hidden cheat code” was discovered to reach the ending at once, and the official account reported that “the last secret seems to have been discovered.”

Mr. sadfutago posted on the overseas bulletin board Reddit on June 11 this yearI started a thread called “How can I get to church?” The content of the consultation was, “My friend can’t go to the church area, so I want you to tell me how to get there.”

Several users have responded to this question, but they are all a little confused.Because the church area that Mr. sadfutago talks about should not exist.

And on June 19th, sadfutago shared a play video. Posted a video of a hidden door leading into the church area, causing further confusion in the community.

The video shows the opening of a hidden door, but such a door should not exist.

Some users are excited about the emergence of a new mystery and start investigating. According to a Reddit post, sadfutago himself seems to have cooperated with the investigation through Discord and elsewhere.

Someone randomly posted a video on the Nier Automata subreddit showing they found a secret room in the Copied City. So far no one else has worked out how they managed to make this secret door appear. Literally one person on earth has accessed this room and we are uttered mind blown pic.twitter.com/g7W4JxiNDg

Furthermore, on July 26,McDonald, discoverer of “The Last Secret” (cheat code)mentioned this mystery on Twitter.
According to him,It’s been about a month since the first video was posted, and no one except sadfutago has been able to open this hidden door.I’m telling you.

McDonald also mentioned the possibility that it was a fake video created by a user-made mod.“With the current mod production technology of this work, such remodeling is impossible.”has expressed the view thatWhile no one can reproduce it, it is unlikely that it can be realized even by remodeling. It is said that there is no decisive evidence to show whether it is real or fake.

This is why I can’t stop Nier Automata

What is this worrisome content?I don’t want to start after a long time

It’s amazing if you do it! !
Even if it’s a lie, there’s romance

If it’s a video that opens the door like reddit’s, it looks like it could be made as a fake MAD, but when it comes to Twitter’s level, the necessary editing power is too different…
This is amazing whether it’s real or fake…

It’s interesting, but the geometric design of the duplicated city doesn’t match the tip of the door.
I feel fake…

A new area that will be added in an update to coincide with the release of the Switch version has been leaked.

I love this kind of game city legend story

I’m going to a replicated city!

If it’s true, it’s a big discovery, if it’s fake, it’s a technology that no one has reached
Excited

Discoverer: My friend asked me, “How can you open that door?”
↓
Netizen: “Huh… is this really…? No one has found something like this…”

that means
Is there really a hidden area, or is it a fake video with super technology…

Is it really possible that the door won’t open unless there’s a coincidence?
It’s Nier, and the fact that “Yokootarou could do it” makes it even more mysterious.