NVIDIA acknowledges that Grabo will continue to be an expensive product → CEO “ 〇〇 is dead. Cheaper is a past story ”

NVIDIA: Falling GPU prices are ‘a story in the past’ 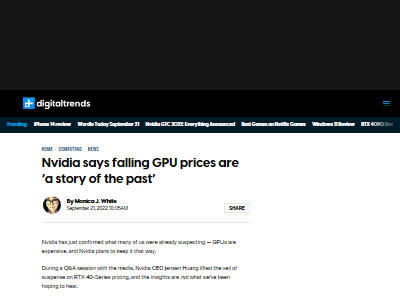 NVIDIA acknowledges that GPUs will continue to be expensive products

・Mr. Huang made this clear in the Q&A session. “Moore’s Law is deadIt is. Today 12 inch wafers (the material used to make semiconductor devices) are much more expensive.The idea of ​​falling chip prices is a thing of the pastThat’s it.”

・According to Moore’s Law, semiconductor circuits double in performance at half price every two years..However, recent inflation is said to be driving up the price of GPUs

・Because of the desire to sell out the old “RTX 30 series”, setting the “RTX 40 series” at a high price seems to be a reasonable decision.

Why is it cheaper to buy PS5 & XSX & Switch than to buy one GPU?

I will never buy an NVIDIA product again.

Are you seriously saying that such an abnormal price will become the standard from now on?
Just because you want to sell off the 3000s isn’t it too unreasonable…?

Combined with the depreciation of the yen, Japanese prices are likely to be outrageous.
AMD, depending on the price setting, there may be a market share reversal