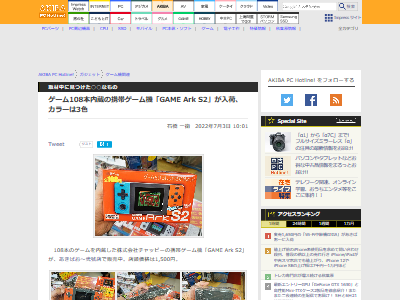 This is a portable game machine that runs on 3 x AAA batteries.The design somehow reminds me of Nintendo Switch, but there is no gimmick that makes the left and right controller parts come off.

Also, under the four-way controller and four A / B buttons,There is a round part like an analog stick, but this is just a design and does not move(Described in the manual).

There are three types for each color of the controller part. If you are tired of smartphone games, how about one?

I think it’s probably a prize, but even though it’s cheap, it’s amazing that it has analog sticks on the left and right!When I thought that, it was written in the manual that it would not work.

It’s been a long time since I’ve seen a game machine like this w
The analog stick is a decoration and does not move again ww
However, 1500 yen is too cheap w

Also, with this, Zakoshi will be able to deliver a review of the built-in game

If you buy it from Amazon, it’s double the price.

Well, I know this is a joke item, but there are a lot of serious fakes out there…
They’re mostly made in the same country ()