NHK decides to make a live-action drama on NHK

“Because I’m fresh” will be made into a drama on NHK!Starring Rei Maruyama, Directed by Seisho Ito – Natalie 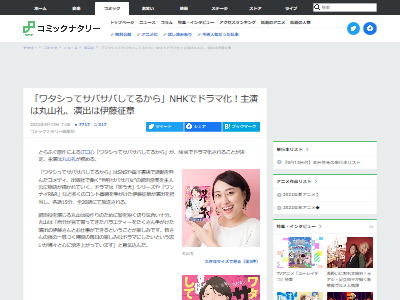 It has been decided that Kokoro Eguchi’s “Watashitte Saba Saba Teru Kara”, based on the Torafugu manga, will be made into a drama on NHK. Rei Maruyama will play the leading role.

“Because I’m fresh” is a comedy that became a hot topic on SNS and e-bookstores. The story is centered around Nami Amihama, a self-proclaimed frivolous woman who works at a publishing company.The drama will be directed by Seisho Ito, who has worked on many comedy shows such as the “Warau Dog” series and “Wannai R&R”, and will be broadcast in 20 episodes, with each episode taking 15 minutes.

Maruyama, who plays the role of Amihama, cut his hair short for the role and is full of spirit.Maruyama said, “I’m looking forward to working with Mr. Ito, who directed many of the variety shows that I grew up watching. I’m excited to make it a drama that everyone can enjoy every day when they can take a break at night. It’s welling up in my heart,” he said enthusiastically.

Wow! I will be starring in a drama for the first time😭✨✨
NHK will start next January
“Because I’m fresh”
I will play Nami Amihama, a strong self-proclaimed “Fresh woman” 🐟
I’m so excited for the biggest role of the century🥰✨
The hair is also a short net-chan specification 🫰
Please enjoy it! @nhk_dramas 🫶🏻https://t.co/XK0Py05lzP pic.twitter.com/fARw4dO0CX

Is there a suitable person so far…?

I wonder if there was such a talent

I think that the main character will only have a negative image, but I want him to be defiant and perform a mysterious performance.

I have an interesting feeling about this! ! !

I’m looking forward to this drama