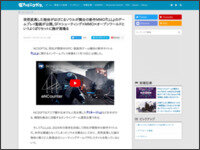 ・NCSOFT released an in-game play video of the new title “LLL” for PCs and home video game consoles under development.

・The game is set in the ruins of Seoul, and is said to take the TPS style of fighting mysterious mutated objects.

・In the released video, you can check the important elements of the shooting game such as shooting, movement, navigation, and multiplayer. It is said that they are doing “various trials and development” to create an interesting game by combining multiple popular genres such as MMORPG, open world, SF, and shooting.