MS “Maintain Xbox price by year-end sales season” ← Does it suggest a price increase after Christmas? 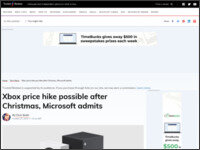 ・Microsoft has admitted that it may raise the price of some of its Xbox products following Sony.

At the WSJ Tech conference on Wednesday, Xbox chief Phil Spencer said the company has decided to hold prices ahead of the busy holiday season.

It states that the change will not come until the beginning of the year.

This means that the Xbox Series S and Xbox Series X consoles, which have maintained their launch prices, could see price increases in early 2023.

・Xbox Game Pass, which is considered to be the most cost-effective in the game industry, may also be raised.