Mr. Koki Mitani, who worked on the script of “Sazae-san”, was fired after only three episodes → The fourth episode that infuriated the producer was too dangerous www 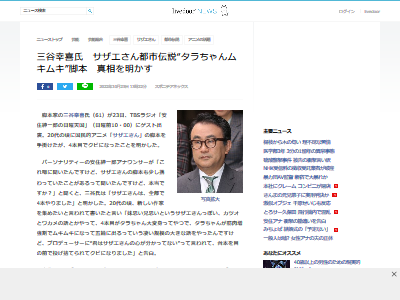 Scriptwriter Koki Mitani (61) appeared as a guest on TBS radio “Shinichiro Azumi’s Sunday Heaven” (10:00 before Sunday) on the 23rd. He revealed that when he was in his 20s, he wrote the screenplay for the nationally-acclaimed anime “Sazae-san”, but he was fired after the fourth one.

Up until the 3rd episode, Sazae-san’s story of caring for her younger sister and older brother was typical, but the 4th episode, “Tara-chan’s makeover,” became a problem.

The content was that “Tara-chan will become muscular with muscle building drugs and participate in the Olympics,” but the producer said, “You don’t understand Sazae-san’s heart.” He said he was fired.

When Azumi asked, “What if the situation were reversed? What would you do if a young writer came up with a story that would make Tara-chan go crazy?” .

just the synopsis is interesting

I wanted to see w

I want to see a world line where Tara goes to the Olympics when she becomes muscular with a muscle enhancer.

Caught in doping and falling Life isn’t going straight up.

If it was a radical time 50 years ago, I might have passed

It looks really interesting wwwwww I wanted to see it wwwww

As expected, the content that encourages doping is useless lol