Microsoft “Sony is just cheating! I want software like Genshin Impact on Xbox!” Negotiate with a Chinese development studio by spending a lot of money

Microsoft ‘wants its own Genshin Impact-like game’ for Xbox 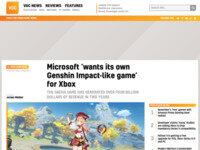 ・According to Reuters, Microsoft is accelerating plans to find a title equivalent to Genshin Impact, an action role-playing game that Shanghai studio miHoYo has grossed over $4 billion in two years.

・”Genshin” is an anime-style open-world game that earns revenue through the ability to acquire special playable characters (and weapons) through billing (Gacha).

・Microsoft is looking for new developers in the Chinese market, and is said to have “courted out independent studios with big bucks.”

・Sony doesn’t own the Genshin Impact IP, but partnered with developer miHoYo early in development to help bring the game to market.

・”Genshin” is being developed on PC and mobile,Home game consoles are exclusively for PlayStation

It turns out that most of Genshin Impact’s revenue comes from the mobile platform, but it regularly ranks among the most-played free games on PlayStation.

・Reuters sources say Microsoft “regrets missing out on Genshin Impact,” and that it spoke to miHoYo early in Genshin Development’s development, but negotiations fell apart.