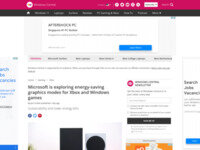 ・The survey details the potential new features they are considering for games on Xbox consoles and PCs, noting that they would choose to reduce framerates, resolutions, etc. in order to limit energy consumption. ing

question
“In general, how do you feel about having in-game features that, when turned on, allow you to optimize settings and save energy?”

“In general, what do you think about individual games automatically lowering their framerate or resolution (to save energy) when the game is idle or inactive?”

・They also asked if they were worried that turning on the energy saving feature would negatively impact their gameplay.

Of course, such research doesn’t always translate into the final product, but Microsoft has committed to zero carbon use and is increasing its investment in this area.