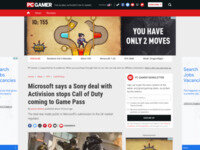 ・A footnote in Microsoft’s submission to the UK’s Competition and Markets Authority (CMA) has been found to explain why Call of Duty is not included in Xbox Game Pass.

According to documents submitted by Microsoft,“Contract between Activision Blizzard and Sony”and,“Restricting Activision Blizzard’s ability to distribute COD titles to Game Pass for several years”It is annotated that there is something like

With such a deal in mind, Xbox’s Phil Spencer spoke with Sony in January and confirmed that Microsoft “will honor all existing agreements once it acquires Activision Blizzard.” seems to have been put

Unfortunately, this footnote ends there, with no details on what these restrictions are or how long they will be in effect after a successful acquisition.