Major economic magazine “Xbox’s exclusive title is far from PlayStation. Bethesda acquired by MS spends too much time on development” 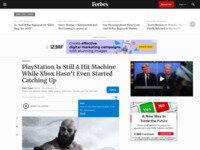 ・“God of War Ragnarok” made the impossible possible.It matched the astronomical high score of its predecessor, God of War 2018, with a Metascore of 94, a place only a few video game series have reached so far.

God of War Ragnarok is the latest in a long, long, long series of very good PlayStation first-party exclusives.

・The list of PlayStation first-party games is just huge, with the Uncharted series, The Last of Us Part 1 and Part 2, Horizon Zero Dawn and Forbidden West, Spider-Man, and Ghost of Tsushima. , Bloodborne, and two generations of the highest-rated God of War.

・Xbox doesn’t have many meaningful exclusive titles in one generation, and it’s safe to say there’s nothing on the level of Sony.

・For two generations, Xbox’s best exclusive titles have been the Forza series, and they’ve relied heavily on players’ love of the racing genre in the first place.

・Microsoft is clearly aware of this problem and has started buying studios to produce hits like Sony’s.Microsoft has literally said many times that it knows this is a shortcoming of the Xbox and is taking steps to fix it.

Again, the “best” Microsoft exclusive of this generation is likely to be the Forza game, while Halo Infinite, which was supposed to be a massive flagship title, was a disappointment and underperforming. It has been performing well, and even after a year, the problem has not been resolved, and the future of the franchise as a whole is in question.

・It’s been two years since the generation of this game console started, but what is the current situation?Sony just released another Game of the Generation contender and has remastered and released most of the previous generation’s mega-hits.

・But most Xbox exclusives come and go without much fuss, if not outright controversy like Halo Infinite.

・If “Starfield” is as good as the main titles of Bethesda’s past “Fallout” and “The Elder Scrolls”, it seems that the possibility is actually high.There is no doubt that the new Elder Scrolls game itself will appear later.

・But here’s the problem.This process is taking so long that it will be nearly half a generation before Microsoft racks up the points.

Sony, on the other hand, has Spider-Man and Wolverine coming out of Insomniac, and what studios like Naughty Dog and Sony Santa Monica do next will certainly be hits as usual.

I’m not too sure about the results of big projects like Microsoft’s announced Perfect Dark and Fable.

・This isn’t a scathing criticism, I’m stating what Microsoft’s Phil Spencer himself has said on the subject, and he, like everyone else, has Starfield come along and change the narrative. waiting to start

But Microsoft will still have a surprising amount to do