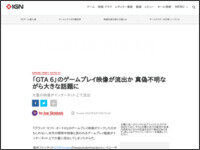 ・A large amount of gameplay videos that are believed to be from the development of Grand Theft Auto VI have been leaked online.

・A user named teapotuberhacker on the overseas fan site GTAForums posted a zip file.“90 footages of GTA 6. We may be able to share more data soon. This includes GTA 5 and 6 source code, and GTA 6 test builds.”wrote.

・These videos also appear on YouTube and Twitter, and include shootouts, robberies, and voiced cutscenes. Debugging tools are often displayed, and it looks very similar to “Red Dead Redemption 2”. If these footage are real, rumors about it being an adventure set in Vice City and featuring a female lead would be correct.